…Because He Couldn’t Afford Her Medicine, Sheriff Says
Normally, I might say that this is from The National Enquirer (which DID uncover the John Roberts’ affair, so let’s not forget that). Anyways, this was in The New York Times. 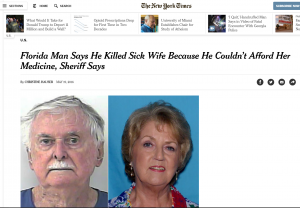 I wasn’t there, I don’t know them. And this is a tragic story, no question. Let’s presume for the sake of the husband, that he was not psychologically ill. Even if that was the case, the duress that high medical bills, coupled with the distress of being a caregiver, is high, to put it mildly. The #1 cause of household bankruptcy is not credit card debt, nor is it mortgage foreclosure, it’s healthcare cost.

Let’s take a look at the article specifically. What can we learn?

a. Someone is sick? The partner can become sicker than the original patient. The caregiver’s illness can be physical, and now you see it, emotional. There’s the stress, and, of course, the money.
b. Couldn’t afford the medicine? Sounds like a MEDICARE problem, and it isn’t certain that the couple was properly configured. Why would I conclude this?

c. Pain killers (e.g., Percoset) are a large problem. Many Medicare Advantage plans don’t cover painkillers, and many Part D plans don’t either. So, it is important to focus on the cause. While it is admittedly impossible to know, if point b was properly configured, then wouldn’t the pain be more manageable, and in which case the financial ripple-effects, and subsequent distress suffered by both been avoided? This is pure speculation, but now…we’ll never know.

It is “funny,” because a review of the book called my book “preachy.” Uh, I guess. That’s because it is written to give a full set of information, TO TRY TO AVOID THIS.

I guess we have a new sample of “This Happens” for the 2017 edition of Maximize Your Medicare.

Medicare For All has been formally introduced. Hint: If you are hoping to re-elect the sitting POTUS, you’re off to a very good start.

New email went out to subscribers today: Check it out.

New email went out to subscribers today: Check it out.

The ebook sells for $5.99, get $5 of it back immediately for first-time buyers on walmart.com

New email went out to subscribers recently: Check it out.

This site uses Akismet to reduce spam. Learn how your comment data is processed.

Yikes: Man Says He Killed Sick Wife Because WHY?